Karate Do Association of Bengal (KAB) has successfully used the virtual platform to enrich the knowledge of their players and coaches by organizing various Kata & Kumite Training Webinars with world class players and coaches under the reign of World Karate Federation. KAB once again created history by inviting Sensei Ali Alzaharani of Saudi Arabia to conduct an “Online Karate Training Seminar”, in association with Karate India Organisation (KIO), the only authentic National Federation for the game of “Karate – Do” in India on 15.01.2022 using the virtual platform.

The Webinar was inaugurated with the blessings of Hanshi Bharat Sharma (Mentor of KIO & Member of the Technical Commission of World Karate Federation). In his words, he appreciated the hard work and efforts of Hanshi Premjit Sen (President of KAB), who tirelessly keep on doing something for the betterment of the players and coaches of Bengal and India, during this crisis time of a pandemic.

Mr Premjit Sen is a WKF A grade referee and he has been a known face of WKF for more than a decade . He has also produced numerous championships. Mr Alzaharani has been a brother to Mr Sen and it is on his request , Mr Alazaharani had agreed to organise this webinar for the development of Indian Karate athletes .

Mr Premjit Sen has told “ I believe in hard work and consistency and with these two elements I intend to take the Indian Karate at the top. ”

Karate Do Association of Bengal (KAB) is the one and only authentic Karate Association in the state of West Bengal, which is duly recognized by the Karate India Organisation (KIO) and Bengal Olympic Association (BOA). KAB is headed by its President, Hanshi Premjit Sen and General Secretary, Kyoshi Joydeb Mondal.

Sensei Ali Alzahrani of Saudi Arabia appreciated the initiative taken by the KAB to organize such a grand event. He is a renowned WKF Coach who has produced Gold Medalist at the prestigious Tokyo Olympics 2020. Under his guidance, many players have won medals at the World Championships, World Cup, and Asian Championships. He is currently the Chairman of the Saudi Arabia Coaches’ Council. Sensei Ali appreciated the efforts of Hanshi Premjit Sen, who had work a lot for the betterment of Indian Karate. The players and coaches of India were overwhelmed and honoured to train under and share knowledge from such a legendary world class coach of an Olympic Gold Medalist. With this Webinar, the organizers hope to enlighten the knowledge of the budding karatekas in India.

The Vote of Thanks was given By Kyoshi Joydeb Mondal (General Secretary of KAB), who thanked the Guests for encouraging the players and coaches by sharing their valuable knowledge during this time of the pandemic. In future too, KAB has planned various Training Webinars at the National and International level, which will be conducted by world class players and coaches. Most importantly, not a single rupee was charged from any of the players or coaches, to participate in all these events. 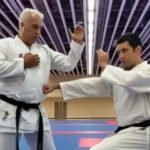 Hanshi Premjit Sen at the 36th National Games 2022 in Gujrat as the "Deputy Chef De Mission" for the Bengal team, as appointed by the Bengal Olympic Association (BOA) 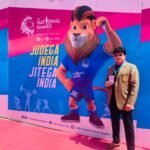